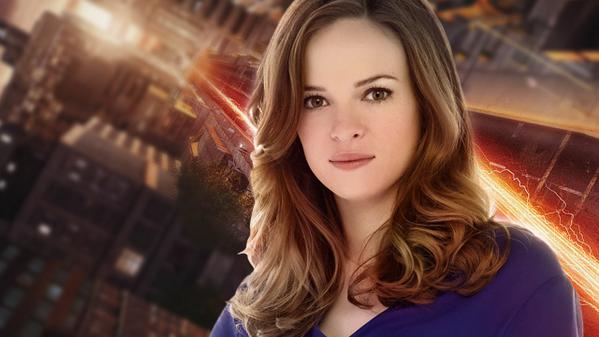 On The Flash this week Caitlin Snow and her Earth-2 (and comic book) alter-ego Killer Frost finally met.  Killer Frost’s malicious amusement at the situation vs. Caitlin’s confused horror was pretty entertaining.  As was Caitlin’s reaction when she found out her evil doppelganger was going to double-cross her – Hey, Caitlin, did we mention she’s your EVIL doppelganger?

These two were presented as the good & evil sides of the same coin – smart, ambitious, and as a previous episode revealed, in love with the same man. Only two things seemed to be truly different 1) Killer Frost got superpowers as a result of the particle accelerator explosion & 2) Killer Frost had decided to use those superpowers for evil.  And I would say that even the first difference doesn’t really count – Caitlin’s life was also radically altered by a similar explosion.

This small moment suggested that it wasn’t the circumstances that made these two characters what they were, good or evil – it was their choices.  The theme of “choices make the hero” was reinforced by the episode’s other plot line – Barry, even without superpowers, risking his life to save another person.

I love the idea that what makes a person a “hero” isn’t their circumstances, but what they choose to do with them.  Also, kudos to Danielle Panabaker for playing two great characters in one episode.

Supergirl Update:  As if in response to my parting shot last week apparently there was a article in Variety this week that gave further hope to the idea that Supergirl will most likely be renewed.  But, you know, I want the official word – and if it came with a little fanfare and a little less “this show didn’t quite do what we wanted it to do” that would be ideal.

What do you call a person who loves (perhaps to a tiny bit of obsession) a movie, TV show, or book?

In modern society, depending on their gender probably either a fanboy or fangirl.

So why does the title make me uneasy?  Well, mostly, because of this:

The tricky thing about the term fangirl is it also gets used to describe those young women who are, shall we say, enthusiastically enamored of various celebrities.  In the Sherlock fandom it’s rapturous odes about cheekbones, in Arrow it manifests as too many pictures of Stephen Amell’s stomach (put your shirt on!).  So for a happily married woman, long past her teenage years, it’s a little problematic.

I think it’s interesting that I haven’t seen “fanboy” used in quite the same way.  Say the word “fanboy” and people think of dudes who have 1,357 comics in collectible bags or have created their own Klingon to Elvish dictionary.  They don’t think about screaming, crying hordes of teenage boys throwing themselves at the feet of Wonder Woman.

So am I a fangirl?  If you mean did I dance around saying “X-Files, X-Files” in a giddy voice a couple of months ago?  Absolutely.

Do I get emotionally attached to fictional things?  Oh yeah, way attached.

But don’t expect me to faint or throw myself at anyone – even if Superman himself lands on my front lawn.

The Flash has a hostage crisis, again

At our house we love The Flash – it’s sincere and dramatic without being dark.   We love Cisco’s geek references and ability to speak for the fans, Joe West’s best-father-on-tv mojo, brilliant and sweet Caitlin, and of course, Barry the slightly nerdy everyman superhero.

And I loved this week’s episode – except for two things.  When the bad guy is there – just standing around – and you have weapons that might allow you to capture him or at least scare him off – why not use them??? Is this a “we made a deal” honor thing – because that really doesn’t fly. He’s a mass murdering, kidnapper bad guy – take him down!  And the second thing – did we really need two “Oh no! He took someone we like” moments in the same show? I’m  worn out on superhero hostage crises and two in one episode felt a bit lazy.

I got to watch Supergirl and Martian Manhunter save the world and kick Kryptonian bad guy butt – who needs some gloomy movie? We’ve kinda got the Justice League right here, and it’s awesome.  Oh and one more thing….

Have a great Saturday!

I love a great pep talk.  Writing is such a solitary endeavor that it’s always a relief to discover a talk or post online that makes you feel warm and fuzzy and hopeful about writing again.   Here are three of my favorites:

On this page from her site Shannon Hale posted actual examples of the rejection letters that her agent got from publishers who read her first novel The Goose Girl, which became an award-winning book and the first in a series.   One editor even called her writing “stiff, clichéd, or self-conscious” – yikes.  It was heartening to know that an author I admire once faced such negative feedback on her work.

One of the best things from this speech is his idea that you should evaluate the things you spend your time and energy on based on whether or not they get you closer to your creative goals – it’s surprisingly hard to do, but it’s a lesson I wish I would have learned at a much younger age.

My favorite thing about this talk is her idea that you have to find your creative “home” not in success or failure but in the work itself.  Oh, and that my mom was the one who suggested this to me.  Thanks Mom!

“But if you step out that door, you are an Avenger.”

I’m the little girl who always read the back of the cereal box at the breakfast table.  The woman who uses the “define” search in Google several times a week because I want to know exactly what a word means or where it came from.  The writer who gets a little crazy trying to think up the right name for a character, because names and words have power.

I’m the person who was excited for a week when I found out about the word “numinous” – because it’s always a thrill to find out there’s a word that perfectly describes something you have felt.

So I write because there’s no better way to play with my favorite toys – words.